Rajma (also known as kidney beans) are very good source of plant-based protein and fibre. Even though Rajma’s origin was in Mexico and not India, the Rajma Recipe still is a very popular North Indian or Punjabi cuisine like Chole Recipe, Dal Makhani etc. Other than India, rajma is also used in several other countries – Nepal, Spain, Netherlands and Indonesia for cooking many similar recipes.

Cooking Rajma recipe or Rajma Masala Recipe is not very tedious. The only step which consumes most time is to soak Rajma. Soak rajma overnight and then pressure cook to make them soft, and then we add some spices, onion, tomato etc. and make medium thick gravy which is know as Punjabi Rajma Masala. I haven’t used kasoori methi or coriander for this recipe but you can add coriander, kasoori methi if you like to.

Though Rajma also tastes awesome but to be honest it’s not my most favourite compared to Pindi Chole and Dal Makhani recipes. But I cook this delicious Rajma recipe sometimes because some of my family members like this restaurant styled Rajma Recipe. If I have to choose one from all then I will always go with Dal Makhani first 😋 because that’s my “the favourite recipe” 😉 from North Indian gravy recipes collections.

You can check my other recipe blog for restaurant style Dal Makhani Recipe.

However, if Rajma Recipe is your favourite recipe then this restaurant styled Rajma Masala Recipe is for you. Prepare this Punjabi Rajma at home to enjoy your favourite food and get some compliments from your family members. Happy cooking is the mantra to be happy and make your loved ones happy with the tasty food. And yes this Rajma recipe is an addition to my other vegan recipes collection. So my Vegan friends also can enjoy this super healthy Rajma recipe at home.

Here is one of my Simple and Quick Chatpata Salad Recipe to accompany with Rajma recipe for a full meal combination.

You can server Rajma with plain rice, jeera rice, vegetable biryani or veg pulav or any other rice varieties too. I recommend you to visit, an outstanding vegetable rich pulao recipe blog as well Vegan Veg Pulav recipe.

I hope you will love this wonderful Rajma recipe and other recipe suggestions like Dal Makhani and Simple and Tasty Veg Pulao recipe. To check many more such tasty food recipes, you may also visit FoodQuench’s YouTube Channel. 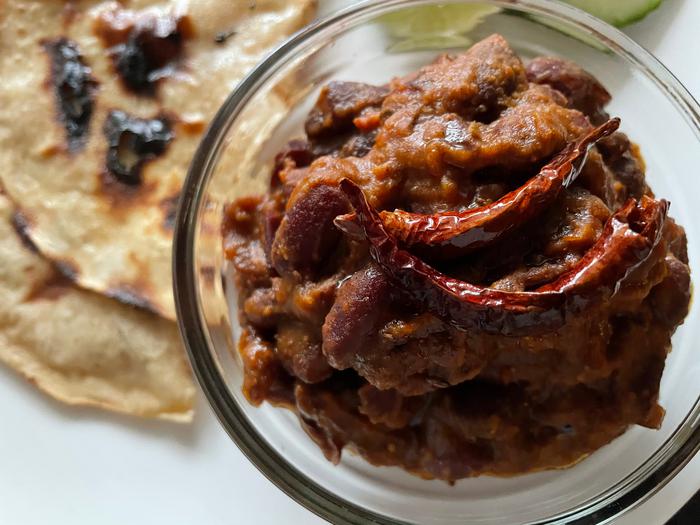