This Stuffed Mini Bell Peppers recipe turns out very soft and nice golden in color. This recipe is a combination of Western and Indian taste as the main ingredients is bell peppers and a few Indian spices are used.

The Bell peppers I have used for this recipe are mini bell peppers. I am not very sure about the main country of its origin but I believe it is available mostly everywhere around the world.

For this Stuffed Bell Peppers Recipe, I have used very simple ingredients. There is no onion or garlic used in this bell pepper recipe. There are no much efforts required to chop or grind any vegetables. This recipe is very simple and easy to cook. The only time required is to boil potatoes and except that everything is easy and pretty straight-forward.

As this stuffed bell pepper recipe is a no onion, no garlic recipe, it is a good option for vegans too. You can also visit my another vegan suitable Brussels Sprouts recipe blog for another such simple vegan recipe.

To check many more such tasty food recipes in video formats, you can also visit FoodQuench’s YouTube Channel.

All the discussion about this nice recipe is over now. So let’s quickly start preparing this simple stuffed mini or tiny bell peppers recipe. I hope you enjoy this vegan friendly tiny Stuffed Bell Pepper Recipe. Cook this recipe at home and enjoy your meal – eat healthy and stay healthy. 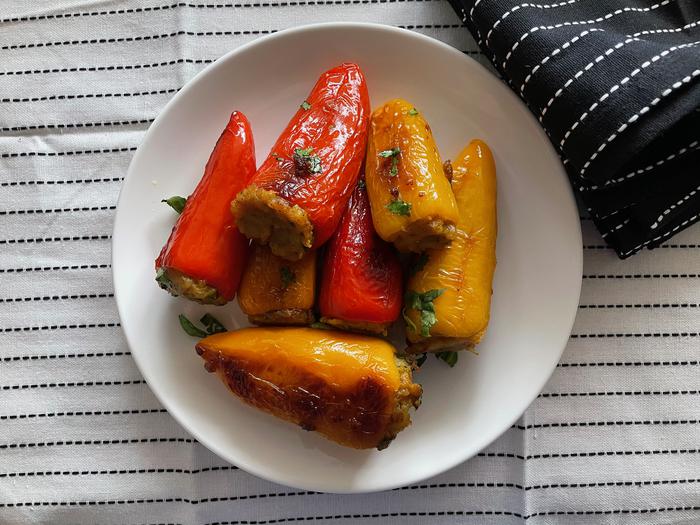 Stuffed Mini Sweet Bell Peppers recipe is a tasty and simple vegan friendly healthy recipe. This recipe is a combination of Indian and western taste. Try this colorful vegetables recipe with simple steps.