Mirchi Panchamrut and Mirchi Salan are more over same recipes and the ways of preparing both are quite similar. However, the difference is in just a few ingredients. Mirchi ka Salan recipe is basically served with Hyderabadi Biryani and Mirchi Panchamrut is accompanied with Puran Poli on festive seasons along with some other varieties of dishes.

Mirchi Panchamrut recipe is thick gravy or curry based side dish which goes well with Puran Poli or Obbatu (or Holige). It also tastes amazing with Jowar roti or Bajra roti and can even go well with rice recipes as a side dish. On a side note, Puran Poli or Holige is a sweet Indian flat bread or roti recipe made up from boiled gram lentils, and cooked with jaggery to form thick mixture. The mixture is stuffed in wheat dough balls and rotis are rolled out to make Puran Poli or Holige.

Gravy or curry for Mirchi Panchamrut is prepared from roasted peanuts powder and roasted sesame powder along with some other ingredients and few spices. As this is Maharashtrian styled recipe, adding jaggery is important as Maharashtrian and Gujarati recipes has some light sweet taste to the recipes.

Quite similar ingredients of Mirchi Panchamrut are used to make Andhra styled Mirchi ka Salan gravy like roasted peanuts powder and roasted sesame powder. along with some dry coconut. Some people choose to add onions, garlic, ginger etc too. In Hyderabadi Mirchi Salan, jaggery is not used.

As I mentioned earlier, Mirchi Panchamrut is accompanied with Puran Poli on festive seasons and any Maharashtrian or Gujarati festive recipes or puja thali (naivedya or bhog) recipes doesn’t contain onion or garlic. However, still these festive meals taste amazing and that’s the speciality of festive recipes. It might be similar in some other regions of India as well.

Get set and ready to check this quick Mirchi Panchamrut which is a vegan recipe. To check many more such tasty food recipes in video formats, you can also visit FoodQuench’s YouTube Channel. 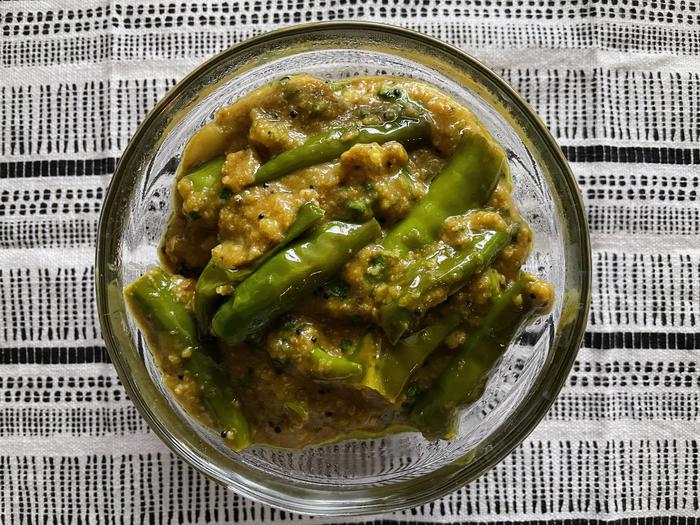 Mirchi Panchamrut or Mirchi Salan recipe is a dish made with green chilies as its main ingredient. It is sweet, tangy and thick gravy based side dish which goes well with all main course recipes.